Get fresh music recommendations delivered to your inbox every Friday.
We've updated our Terms of Use. You can review the changes here.

by Robin Storey and Victor Nubla 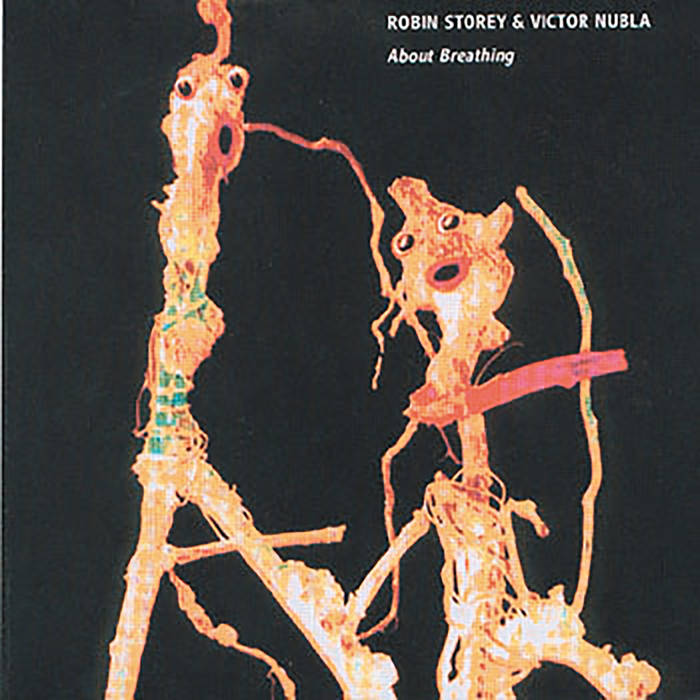 Recorded in Northern Spain, About Breathing brings together Victor Nubla (Macromassa) with Robin Storey (Rapoon and Zoviet France). This collaboration of live source recordings and samples, examines a variety of source materials and ambient sinewaves. This CD dances in Southwest Asian rhytm and distorted wind instrumentation, recycling sound like breath in the track “Exhalation of Stars”, a striking 22 minute-long masterpiece. At times sonic, the wash of reverberation is an austere archetype of futuristic skylines. (TJNorris Reviews June 2002)

From the subterranean world of dark ambient music comes this powerful collaboration between England's Robin Storey (a.k.a. Rapoon) and Spain's Victor Nubla. Both men have been active in several art forms since the industrial movement began in the late '70s; Storey as a founding member and designer for Zoviet France, and Nubla as a member of Macromassa and artist/curator for gallery installations and work in radio, theatre and film. Both artist's musical modus operandi involves manipulation of sound and for their first collaboration they choose to start with environmental recordings made in Canfestis, outside of Barcelona in Northern Spain. Like the music of Rapoon, the processed waves of sound create new psychological spaces like the winds along the Mediterranean coast that shaped the strange landmarks that so inspired Salvador Dali. Shortwave radio samples and some wind instruments are also used, as disembodied voices and pipey echoes of Joujouka drift amidst their unique soundscapes. The CD is dedicated to former Torontonian Salvador Francesch, whose Tibetan Red CD was released by Nubla's label, and who I suspect was the catalyst in the meeting of these two fine artists. (Chris Twomey 06-30-2002)


Now, I suppose Robin Storey is a well-known name, but rather, maybe, from the disguise he uses as Rapoon. Once a member of Zoviet*France, but since ten years or so, working solo as Rapoon. He's responsible for some of the more darker ambient music, using rhythms that either sound like factories or ethnics (a sharp contrast, but a possible one). Occassionally he works with other people and here it is Victor Nubla, another long standing voice of experimental music, but not as known as Storey. They recorded this work in the North of Spain and use whatever sound they found on the spot. Ambient sounds, field recordings and short wave manipulations. Soundwise, I think, they stay closer to Rapoon's sound then Nubla's music. And to be more precise, I think they go back to the early Rapoon. Strong ambient fields of sounds swirling in and out of the mix and is like breathing itself: sounds gets sucked in and sucked out. Like an eternal flow. Sometimes with a driving, almost industrial rhythm that goes back to the ancient Zoviet France days. Powerful ambient from two strong voices. (Frans de Waard - Vital Weekly)

This album is only available at caciocavallo / soleilmoon:

This album is dedicated to Salvador (Tibetan Red)

Víctor Nubla plays electric clarinets, synthesizers, sampler and voice. On Nubla's Bandcamp you can find all his official discography, in solo and of his several collective projects and groups, as well as special collaborations with other musicians and inedit recordings. ... more

Bandcamp Daily  your guide to the world of Bandcamp